support@laserpiles.com
Free 2nd opinion - 10% Discount on treatment - To make it easier for you, Now Laserpiles.com brings you 0% interest EMI option and Cashless treatment. You can visit any of our locations @Secunderabad, Kukatpally, Kondapur, Dilshuknagar, Jubilee Hills, ToliChowki,AS Rao Nagar, Kompally, Bachupally that is closest to you. Laser Treatment for Varicose Veins also available
Skip to content 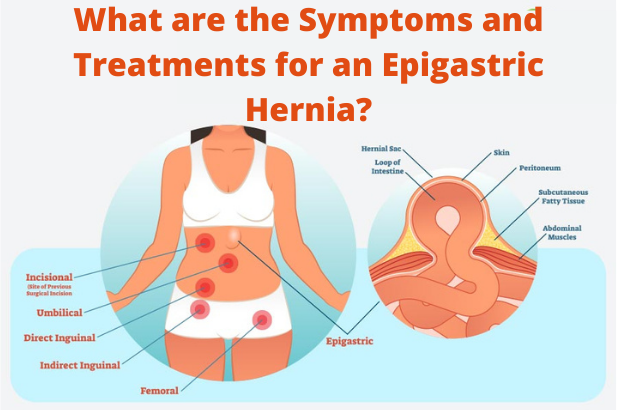 What are the Symptoms and Treatments for an Epigastric Hernia?

A hernia is a slit in a tissue or organ that allows part of an internal organ or tissue to bulge. An epigastric hernia happens when this condition affects the upper central part of the abdomen, between above the belly button and below the rib cage’s sternum. It can affect people of all ages.

Mostly, epigastric hernia manifests itself without any symptoms and, at times, they are minor. In certain cases, they are present from the time of birth. These hernias can vary in size, from small to large.

In an epigastric hernia, a bulge usually occurs in the area above the belly button and below the sternum. The protuberance can always be apparent in certain cases or only when individuals sneeze or cough in other situations. Certain people may be suffering from multiple epigastric hernias simultaneously. For some, it can also set off soreness and ache in the epigastric region.

How is epigastric hernia caused?

In most cases, epigastric hernia occurs when there is a strain in the region where the abdominal wall is linked to the diaphragm.

When does it become severe?

These types of hernias could become severe due to the following

Epigastric hernia has to be treated mostly with surgery, failing which it can amplify and cause increased complexities and pain. The surgery can either be performed in an inpatient or an outpatient setting. The surgeon could be either a general one or one who specializes in colorectal procedures. Prior to the surgery, anaesthesia is performed.

A surgery is, sometimes, complete only after the use of sutures or when a mesh is implanted. Depending on the size of the hernia and other factors, mesh and sutures are suggested. In the case of children suffering from it, surgery can be postponed until they get older and are ready to go through it.

In certain cases, however, surgery may cause the following side effects.

Dangers if an epigastric hernia is not treated

If, in any case, an epigastric hernia goes untreated, it could lead to severe abdominal pain accompanied by fevers or throwing up. This could be due to bowel obstruction or bloated hernia, which allows portions of the bowel to be released involuntarily, severe aching and bruising and uncontrolled growth of hernia in which case it might not be possible to treat it even using a mesh.

The side effects of surgery of epigastric hernia are similar to that of any other surgery and general anesthesia. Additionally, it could also lead to blood clots, profuse bleeding, uneasiness, injury infection where the surgery has been carried out and a possibility of recurrence of hernia or infection in case an artificial mesh has been used.

All said and done, surgery is the safest procedure to treat the condition effectively. In act, most patients can be discharged on the same day when the surgery has been carried out.

Treated people could go back to attend school, college, or work after a gap of one or two days with certain precautions.

Most people would be asked not to lift anything heavy for a period of two months. Sporting activities would also have to be given a break. Doctors will, however, suggest how the treated patients should return to their normal routine.

If you or one of your loved ones is suffering from epigastric hernia, consult us at Vitality’s Laser Piles Clinic to consult us. We will help you schedule an appointment today, Call us: 910 850 3674.